Tons of New Ways to have fun at Walt Disney World


If you are thinking of taking your little princess to Walt Disney World in Orlando, Florida, you are in for a treat: the resort just completed its largest expansion in its history, adding all sorts of new rides and parades. In addition, MyMagic+ will make your stay a lot less of a strain and give you more time to have fun with your family.

Here are the main new attractions, though there also are smaller improvements that you will notice here and there:


Seven Dwarfs Mine Train: This attraction is in Fantasyland. It is inspired by the Disney animated film 'Snow White and the Seven Dwarfs.' The family-style coaster will feature first-of-its-kind ride vehicles mounted in cradle-like pivots that allow the vehicles to swing back and forth during the twists and turns of the ride. Adding to the fun, the journey will be accompanied by music from the film classic and riders will be greeted by animated figures of Snow White, the Seven Dwarfs and their forest friends.


Festival of Fantasy Parade: The Disney Festival of Fantasy Parade brings the stories of New Fantasyland to Main Street, U.S.A. through parade floats, vibrant costumes and an original soundtrack that features songs from favorite Disney films, plus a new parade theme song. The floats celebrate Disney Princesses: Peter Pan and Wendy soar above a pirate galleon; and Rapunzel and Flynn Rider appear on a longship.


Princess Fairytale Hall: It is very exciting that the Princesses now will all be together! Also part of the Magic Kingdom expansion, guests get to live out their dream of meeting a real Disney princess. It is the new home to Anna and Elsa, who until now had been in the Norway Hall but now join Cinderella and Rapunzel each day until the early evening, after which other visiting Disney Princesses will be available to greet guests. Surrounded by purple and gold trimmings, stone walls and ornate chandeliers, guests can choose between two queues; one for Cinderella and Rapunzel, or one for the Frozen sisters and visiting princesses.


MyMagic+: MyMagic+ is a new way to experience the magic of a Walt Disney World vacation. It is the new Disney way to pay for things and make reservations. It will allow you to avoid a lot of lines and replace your credit card in many instances at the Park. Order before your trip and everyone gets their own!


New Nighttime Experiences at Epcot: While enjoying the nightly fireworks, guests can taste decadent desserts from around the world paired with the international sparkling vistas of Epcot Center. They aren't just formal dining spots, either, as there are pizza joints and other kid-friendly spots.

"Sleeping Beauty: Diamond Edition" Coming to the US on October 7, 2014


Disney has released the "Sleeping Beauty: Diamond Edition" trailer in 1080p, above.

Lots of great extras in this package! The Diamond Editions are always great to get unless you already have this film classic on Blu-ray.

The release date is October 7, 2014. If you're also waiting for the Angelina Jolie "Maleficent" DVD, it will most likely be released around the same time so that everyone can overdose on "Sleeping Beauty" all at once.

This has been released on Blu-ray before - the Platinum edition from 2008 was one of Disney's first Blu-ray releases, in fact - so it's not clear what, exactly, this edition adds. If you don't have the original release, though, grabbing this one when it comes out is a no-brainer. The supplemental features look interesting, though it appears they will not be including the original feature "The Grand Canyon" that traditionally accompanied this release. It appears that this will not be a simple re-pressing of the original 2008 release, but a completely new pressing.

You can pre-order "Sleeping Beauty: Diamond Edition," but we won't know for a while whether they've cropped it or done anything else that they sometimes do.

These releases come and go. Generally, there is an active market for used copies of these high-quality Disney releases after the company pulls the re-release from the stores. Copies then can be a bit pricey, too.

Here are the details from Disney:

Official Synopsis: Sleeping Beauty tells the wondrous tale of a princess cursed by an evil fairy, protected by three loving fairies and, ultimately, saved by "true love's kiss." Featuring the voice talents of renowned opera singer Mary Costa as Sleeping Beauty and Disney stalwart Eleanor Audley as the evil fairy, Maleficent, the film's vibrant visuals were created by a team that included Milt Kahl and Ollie Johnston, two of Disney's legendary Nine Old Men and an Academy Award-nominated score, adapted from the incandescent music of Peter Tchaikovsky. Sleeping Beauty is the sixteenth animated feature in the Disney animated features canon and was the last animated feature produced by Walt Disney to be based upon a fairy tale. It is the tenth film released as part of Disney's prestigious Blu-ray Diamond Collection.

Once Upon A Parade, Starring Sarah Hyland - Behind every attraction, event and parade at the Magic Kingdom is a unique story. Join Sarah Hyland from ABC's Modern Family as she tells us the tale of Walt Disney World's new Festival Of Fantasy Parade. This magical "in world" short film goes behind the scenes of the new parade and shows how the residents and characters of Fantasyland created this parade to tell their stories.

Art of Evil: Generations Of Disney Villains – This legacy piece spotlights Disney's favorite villain animator, Marc Davis and his infamous creations of characters such as Maleficent and Cruella. Throughout the piece, we will talk to modern day animators like Andreas Deja and others as to how Marc's designs and characters influenced what they do today.

DisneyAnimation: Artists in Motion, Extended Edition - Join Walt Disney Animation Visual Development artist Brittney Lee as she goes through the process of creating a three dimensional sculpture of Maleficent, completely out of paper. In this extended edition, go deeper into Britney's process.

Beauty-Oke: "Once Upon A Dream" - Sing along to this kinetic text video of Aurora's signature song.

The Fair (with Deleted Character, The Vulture) – In this version of the story, the fairies do not take the Princess to live with them in the forest. Convinced that King Stefan's order to burn all the spinning wheels in the kingdom will not prevent Maleficent's curse, the good fairies put a magic circle around the castle and cast a spell: "No evil thing that walks or flies or creeps or crawls can ever pass these castle walls."

The Curse is Fulfilled - The three good fairies have just returned Aurora to the castle and give her a crown. They leave the room to give Aurora some time alone…but Maleficent pays her a visit.

Arrival Of Maleficent (Alternate) – Maleficent arrives uninvited to the christening of the Princess Aurora.

The Sound Of Beauty: Restoring A Classic - This featurette covers the creation of the 7.1 mix of the score of Sleeping Beauty that was done for Blu-ray, using the source tapes from the original recording sessions resulting in an audio experience of superior quality with greater detail and fidelity that you have ever heard before.

Picture Perfect: The Making Of Sleeping Beauty - Discover the behind-the-scenes magic that transformed a beloved fairy tale into a cinematic work of art. Legendary Animators, actors and film historians reveal the secrets behind Disney's masterpiece.

Eyvind Earle: A Man And His Art - Early in his career, renowned American Artist Eyvind Earle worked as a background painter at the Walt Disney Studio. Walt Disney liked his work so much that he entrusted him with the assignment to be the Art Director for Sleeping Beauty. This was the first time that one artist was given the responsibility for the entire look on one of Disney's animated features. This piece follows Earle's development as an artist and his years at the Studio. 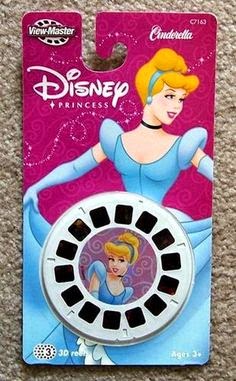 Many parents remember the old ViewMaster viewers as kids. They're still around and great presents for little girls who love Cinderella and all the other Disney princesses.

There is a long history behind ViewMasters, which gave a 3D perspective on classic tales long before that became a fad in the movies. There's also a lot of artwork in the old reels that gives a nice flavor to the tried and true stories of princesses and their gallant princes. ViewMaster Cinderella reels have been around for many decades and have changed over time. 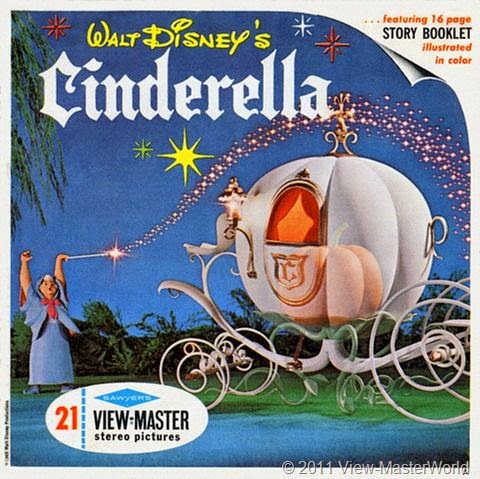 In honor of them, we have gathered a bunch of ViewMaster slides from various incarnations of the Cinderella story for your amusement! 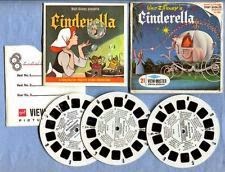 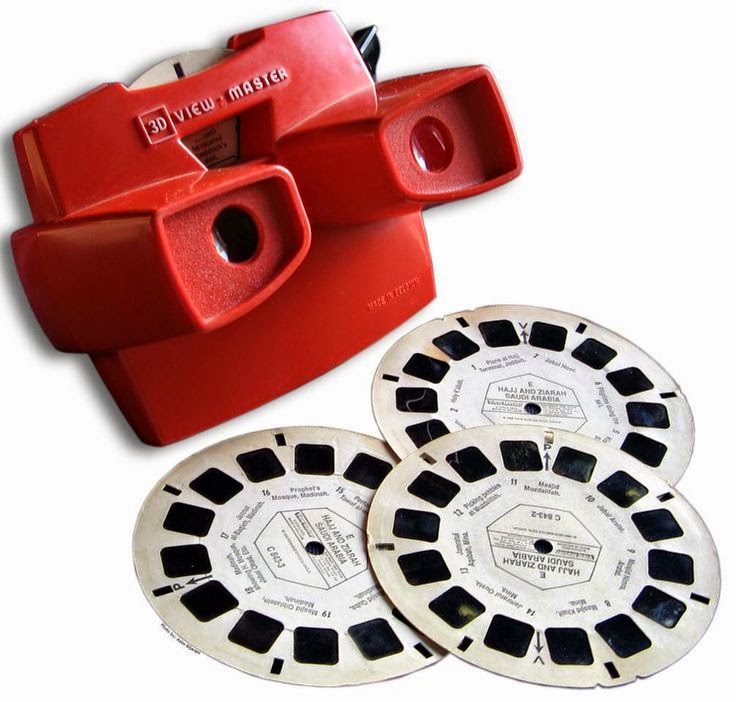