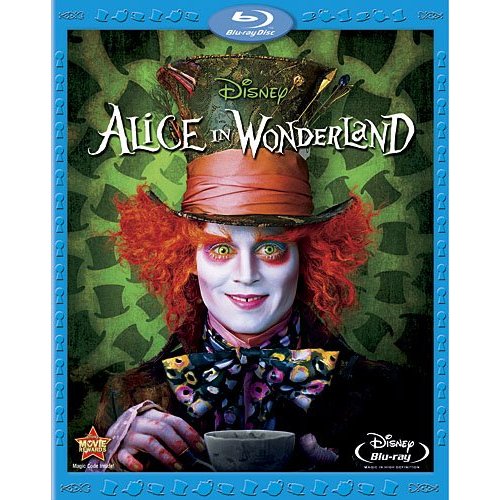 Technically, I suppose, Alice from Lewis Carroll's classic "Alice in Wonderland" isn't actually a Princess. But there are a lot of Queens and so forth in the story, so I am including this anyway. Hey, it's my party and I'll post if I want to! Check out Johnny Depp's notorious Futterwacken Dance on my other site!

Director Tim Burton may be most famous for his stop-motion animation films such as "The Nightmare Before Christmas" and "The Corpse Bride," but Tim Burton's "Batman" and "Edward Scissorhands" show that Tim Burton is a master of live action, too. With his Walt Disney Pictures "Alice in Wonderland" (2010), Tim Burton managed to take a "it's been done" classic fairy tale by Lewis Carroll and turn it into a Disney movie smash box-office hit. Tim Burton did it by contrasting vibrant color schemes with devastation, pairing top Hollywood stars such as Johnny Depp with a complete unknown female lead, and altering human characters with unique Disney movie animation methods to create startling and almost transcendent imagery.

This is Tim Burton's original take on the traditional fairy tale "Alice in Wonderland." Teenager Alice Kingsleigh (Mia Wasikowska) is confronted with a sudden marriage proposal from a rich, titled and effete wanker at a garden party. Conflicted about it, she wanders out and sees an odd rabbit in a blue waistcoat rush by. Following it, she falls down a large rabbit hole into a strange new world Alice dubs "Wonderland" but is actually "Underland," though the name hardly makes a difference, and we shall stick to "Wonderland" because the name of the film is "Alice in Wonderland."

Alice, in Wonderland, soon meets friendly but unusual characters the White Rabbit (Michael Sheen), the murderous Dormouse (Barbara Windsor), the Dodo (Michael Gough), and Tweedledum and Tweedledee (Matt Lucas). These "Alice in Wonderland" characters greet her as a potential savior of Wonderland who will slay the Red Queen's (Helena Bonham Carter) Jabberwocky (Christopher Lee) and restore the flaky but unthreatening White Queen (Anne Hathaway) to the Wonderland throne.

The Bandersnatch and some soldiers under the Knave of Hearts (Crispin Glover) then surprises the group and steal the Oraculum - a scroll of prophecies - for the Red Queen. Alice and the Tweedle brothers escape into the woods. Upon hearing the news of Alice's arrival in Wonderland, the Red Queen orders out her soldiers again led by Bayard the Bloodhound (Timothy Spall) to find and capture Alice.

Alice meets the Cheshire Cat (Stephen Fry), who introduces her to the March Hare (Paul Whitehouse) and the Hatter (Depp). They all head for the White Queen's castle, but the soldiers appear and Hatter has to allow himself to be captured to save Alice. Bayard the Bloodhound finds her anyway, but changes sides (nobody ever does what the villainess orders in a Disney movie, especially in "Alice in Wonderland"!), offering to help her get to the White Queen's castle. Alice insists that they first rescue the Hatter, so they head for the Red Queen's castle.

The Red Queen treats Alice kindly, unaware of who she is (though, if in fact her previous appearance was like that in the original Disney movie "Alice in Wonderland," it is hard to see how she would mistake her, and she already had been alerted to Alice's Wonderland return). Alice quickly learns that the Vorpal Sword that is the only weapon capable of killing the Jabberwocky is locked away inside the Bandersnatch's den. Alice charms the Bandersnatch and obtains the sword, but the Knave sees her with it and chases her until Alice flees on the back of the Bandersnatch. Alice then presents the Vorpal sword to the White Queen.

The Cheshire Cat prevents the Hatter's execution, and the Hatter then tries to stir up a rebellion. It is prevented by the Jubjub bird. Hatter and his allies then flee to the White Queen's castle and prepare for battle, but Alice is not sure what everyone expects her to do (just as she was indecisive about the marriage proposal). Absolem the Caterpillar (Alan Rickman) then tells Alice that he remembers her from her previous visit thirteen years earlier and that she is perfectly capable of defeating the Jabberwocky.

The Frabjous (battle) Day arrives, and the armies of Wonderland prepare to have it out. Alice, clad in armor, fights the Jabberwocky on a chessboard battlefield and kills the beast. The White Queen takes over and banishes the Red Queen. The Queen also gives Alice a vial of the Jabberwocky's blood, and Alice pledges to someday return to Wonderland again. Alice then leaves Wonderland and returns home, where she is a new and independent person.


A lot depends on how you feel about Johnny Depp and his unique acting style and randomly disappearing Scot accent. Depp is all style and mannerisms, but some may think that elevating a minor character to carry a film about major fairy tale character Alice is disrespectful to the source material and a wee bit strained (like the mice taking over the story in "Cinderella II: Dreams Come True"). From this Tim Burton Disney movie's marketing and plot, one might think it was the Mad Hatter who fell down the rabbit hole, and not some vacant girl named Alice, in Wonderland. Reliable Danny Elfman wrote a nice but unmemorable score, replete with mediocre singles later released by Avril Lavigne, 3OH!3 and Kerli.

So, Tim Burton's "Alice in Wonderland" is far from perfect, and that is an understatement. The problems with his "Alice in Wonderland" start from the very concept. Tim Burton apparently envisaged this "Alice in Wonderland" as a cross between a re-telling and a sequel of Lewis Carroll's fairy tale, with a supposed earlier visit (the one in Lewis Carroll?) that is suggested. However, dialogue, scenes and general plot are all lifted from the original. Why they can't just do a straightforward adaptation of such a charming fairy tale is an open question which "it's been done" doesn't address - they re-do "Madame Bovary" every couple of years and nobody seems to mind. While many of these alterations to Lewis Carroll's fairy tale "Alice in Wonderland" are quite clever in an academic sense and make the story more understandable for modern audiences, they also undermine the high-concept conceit. The decision to man-handle a whimsical fantasy into a quasi-realistic veiled polemic on gender relations and looming adulthood was done for modern sensibilities, but jars when grafted onto a 19th Century fairy tale that was solely intended to please children without any angry political messages.


Rather than an ordinary but bored schoolgirl, our heroine becomes an ageing (not married by 19 in Victorian England? Good luck) proto-feminist with modern sensibilities (which. of course, completely elude her poor clod suitor) trying to figure out a "problem that has no name," as Germaine Greer might put it. This leads to ridiculous excesses, such as having stone-faced lightweight Mia Wasikowska putting on shining armor and defeating the supposedly fearful Jabberwocky. Then, in a stupefyingly misguided and completely unnecessary coda, she is seen to compound this foolishness and go on to subjugate China (one wonders how the Chinese felt about that part, and besides, China was already rebelling against Western influences at that time with the Boxer Rebellion). Indeed, there is much which will make you scratch your head in befuddlement at the choices made by the screenwriter Linda Woolverton in drafting this version of "Alice in Wonderland" for Tim Burton. Apparently, she thought (wrongly) that the power-girl theme hadn't been roared loudly enough in Tim Burton's take on the classic fairy tale "Alice in Wonderland."

In fact, it is fair to say that Tim Burton's "Alice in Wonderland" starts out with a terrific premise and entrancing execution that, after the mid-way point, becomes weighed down with a rather hokey "uprising" and a ridiculous battle confrontation. The 3D is good but not that visually exciting for a contemporary Disney movie, and in fact the giant heads and so forth become distracting and pointless (and perhaps disturbing for small children). The stoic, unknown female lead (and whose name somewhat pointedly is not mentioned by Disney's marketing people anywhere in places such as the Disney movie trailer), despite all attempts to make her into some kind of action hero, is basically a cipher upon whom to dump the weirdness of those around her. If Tim Burton's idea merely was to provide a blank slate for the viewers to fill in themselves, and thus experience the pyrotechnics from a central viewpoint, the casting was a slyly ingenious choice, but it also kills the dramatic tension. This "Alice in Wonderland" also is part of a strange trend of recent Disney movies attacking arranged marriages (see "Brave," which, strangely enough, also has Scottish overtones), as if that were a plague upon modern society that must be stamped out right this minute, rather than something that ended in most places well before the time in which this film was set.

The bizarre portrayal at the end of "Alice in Wonderland" of the heroine as some kind of world-beater (this is a girl who couldn't even figure out if she wanted to get married!) who has to keep repeating how much she's "found" herself (writers should show and not have their characters tell things like that, Linda) destroys much of the sympathy for the (dare I say it, relatively homely) Alice that this Disney movie had spent well over an hour trying to manufacture. Tim Burton's "Alice in Wonderland" would have worked much better with a recognizable lead who was more expressive and sympathetic and, quite frankly, a better actress (and they didn't have to look that far away, with Anne Hathaway handy, though it is said that she turned the part down). Hathaway, incidentally, is the best thing about this film by far, playing the White Queen as a sort of dilettante poof whose act, combined with the all-white look, is probably a subversive parody of Snow White and her hyper-girlishness and wonderfulness. It is almost a drag queen impersonation, and it is spot on.