Mulan Takes Charge and Fools All the Guys

Mulan has become quite famous recently for an ancient Chinese legendary figure. To wrench an analogy, she is the Joan of Arc of China and has achieved similar fame in the West. Mulan has her own Disney animated feature film "Mulan" (1998), is a recurring star in the ABC tv series "Once Upon a Time," and a sequel to the first film, "Mulan II" (2005). Mulan's roots, obviously go much deeper than that, way back to ancient China, in fact.

Hua Mulan is known from "The Ballad of Mulan," a poem whose origins are lost in the mists of history. "Mulan" is translated to mean "Magnolia." Her last name varies according to the source, but is usually considered either Wei,, Hua or Zhu. It was first written down for posterity in the 6th century in a document called "Musical Records of Old and New," but undoubtedly had been told and retold for centuries before that. That book itself was lost, but fortunately the poem itself was copied into another book, Guo Maoqian's "Music Bureau Collection" from about five centuries later.


"The Ballad of Mulan" is composed of phrases of similar numbers of characters, varying from five to nine, and each line has different numbers of syllables. It is the basis of a later novel during the Ming Dynasty, and is considered a classic folk tale in China. It is fairly short and to the point and not very "poetic" in a simplistic rhyming sense, and later versions invariably flesh out the story according to their own tastes and needs. For instance, there is no romance in the original ballad, but that is a staple of later versions, especially the Disney one.

A more elaborate operatic film was produced in Hong Kong in 1964, "Woman General Hua Mulan," directed by Feng Yueh. It starred Ivy Ling Po as Mulan and Han Chin as General Li. This classic film is considered by many to be closer to the original story than Disney's later film. It is presented in the form of a traditional Chinese Opera, complete with dancing and singing, though it is not restricted to a stage format and has different sets. It is a serious, adult view of Mulan without anything watered down as in the 1998 Disney film. Instead of a dragon as companion, Mulan has a cousin who helps her to maintain her facade. The idea of sacrificing oneself for the good of the nation was a popular one at the time in Communist China, and this Hong Kong production catered to that spirit.

Disney took the ancient Chinese legend and, as is usually the case when Disney tackles a classical character, added standard crowd-pleasing elements: a wacky animal sidekick, funny fellow soldiers, and, most importantly, a romance. 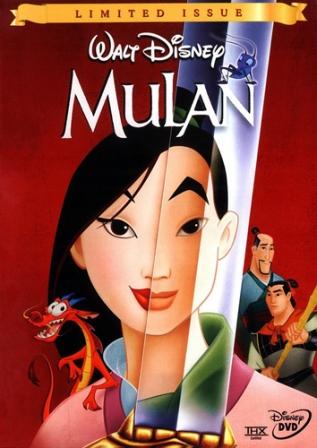 Patriotism knows no gender, and "Mulan" (1998), directed by Tony Bancroft and Barry Cook, portrays a young woman determined to help her country by fighting for it. While no princess, the title character Mulan is usually included with that select group of Disney characters. "Mulan" is based on a Chinese legend (set forth in the traditional Chinese poem "The Song of Fa Mu Lan,") of a story that seems to occur in many other countries as well - that of the plucky female who disguises herself as a male to achieve her unconventional ends. Mulan is a very popular character who remains highly visible in the Disney universe, currently appearing as a regular character in the ABC television series "Once Upon a Time."

In ancient China, the government mobilizes the citizenry to combat an invasion by the dreaded Huns. Each family must provide one male member. Fa Zhou (Soon-Tek Oh), the only male in his family, is too old to serve, so his tomboy daughter, Mulan (Ming-Na Wen), disguises herself as a male named "Ping" to take his place. Fa Zhou prays to his ancestors, who provide the small dragon Mushu (Eddie Murphy) as Mulan's adviser and protector.

Joining troops headed by Li Shang (B.D. Wong, singing by Donny Osmond), Mulan becomes a competent warrior. Mushu arranges for the troops to be ordered into the mountains in relief of General Li, who is Li Shang's father. There, they find that General Li and his troops have been destroyed. The Hun ambush Li Shang's troops as they try to leave, and only Mulan's use of a rocket to start an avalanche saves them.

Mulan is wounded in the battle, and her gender is revealed during treatment. Li Shang does not execute her for being an imposter as required, but leaves her on the mountain. After everyone else leaves, Mulan sees that many Hun were not killed in the battle and remain a threat to the Emperor.

Mulan goes down to the Imperial City to warn Li Shang, but he ignores her. The Huns attack and capture the Emperor (Pat Morita), barricading themselves in the palace. Mulan devises a strategem for Yao (Harvey Fierstein), Ling (Gedde Watanabe) and Chien-Po (Jerry Tondo) to enter the palace disguised as concubines and defeat the Huns with Li Shang's troops.

Mulan challenges the Hun leader, Shan Yu (Miguel Ferrer), onto the roof for a single combat. Mushu, meanwhile, is ready with rockets and fires them when Shan Yu is in the right spot on the roof, killing him. Everybody honors Mulan for her service, but one question remains for her: will she ever find true love?

"Mulan" is a heroic tale of valor and wit. By breaking the rules, Mulan spares her unfit father from having to serve in the military, and her own military sense enables the Chinese to defeat the Hun. Everybody can feel good about the character, as she goes to extreme lengths to do the right thing for her family and the country.

A high point of the film for many is the music. Jerry Goldsmith wrote the score, while Matthew Wilder and David Zippel contributed five songs. Former Mouseketeer Christina Aguilera was a featured singer and did a wonderful job, kick-starting her career as a pop star. "Reflection" was the big hit from the show. Lea Salonga, who previously sang as Princess Jasmine in "Aladdin," did the singing for Mulan. Donny Osmond also performed a song that many like, "I'll Make a Man Out of You."

The animation is wonderful, as always the case with Disney Animation Studios products. Several new techniques had to be developed to portray the crowd scenes shown in the film. A sort of precursor to true 3D, a technique called "faux plane," added depth to several shots in s subtle way.

Not everybody is in love with this film. Some do not find the songs particularly memorable, despite (or perhaps because of) Aguilera's trademark heady vocals (and you can blame "Mulan" for Aguilera's entire career, for that matter).

The story is a bit trite, with the plucky girl who naturally turns out to be a better strategist than any man, and it is not as if the outcome is going to be any great mystery. You would think that with a total of 30 (!) writing credits that the script would have been better.

There are those who think the whole idea of a female having to pretend to be a male in order to succeed is insulting to females, but the story is what it is, it is a historical legend and not something that Disney just made up based on market research or something like that. "Mulan" adds yet more proof to the growing stack that you just can't please everyone.

Mulan has become an iconic figure for many, a symbol of heroism and determination. The voice actors are all excellent, with Eddie Murphy a stand-out as Mushu. Many top Asian-American actors were used for the English voice work, and Jackie Chan voiced Li Shang in the Chinese version and sang a song as well.

"Mulan" made a lot of money and was considered a big success. However, "Mulan" could have made even more if Disney had not been on the outs with the Chinese government at the time (over a film that Disney had funded about the Dalai Lama, "Kundun"). The Chinese got even for that previous slight by scheduling "Mulan" for a soft part of their film year, after New Year's. The film still did well worldwide, out-grossing the previous two Disney releases ("The Hunchback of Notre Dame" and "Hercules"). Direct-to-video "Mulan II" followed six years later, one of the last of the Disney movie sequels to previous hits.

Most people consider "Mulan" to be a fine story about a feminist icon, like Xena or Wonder Woman or similar female fighters. If you want to view it that way, wonderful, but also try thinking about her as just a normal girl trying to do the right thing. "Mulan" is not quite in the same class as the top tier of Disney Renaissance releases such as "Beauty and the Beast," "Aladdin" and "The Lion King," but, then, few films are. "Mulan" makes for a fine evening's entertainment.

The official trailer is below.